A downloadable groovebox for Windows and macOS

A 24/7 lo-fi chip-hop groovebox with a twist: not only can you study and relax to it, you can also build your own beats!

But this is not only something for your ears: the top part of the screen shows pixel art by the amazing Drew Wise - animated in sync with your beats and changing depending on the current time of day!

Based on Drew Wise's cartridge LOFI CHIP-HOP from this year's Famicase exhibition.

*For more info, refer to the tutorial and the included ReadMe.txt.

Recording beats as audio files is easily possible with the free Audacity software, as shown in this tutorial (for version 1.00, but it works the same way in later versions):

Just unzip the file, start the .exe and have fun! For more informations, please refer to the ReadMe file.

If you share your creations on twitter, please use the hashtag #chiphopmachine so that others can easily find it! :)

Can you add your own presets and drums to the program?

You mean user audio files? That's not possible at the moment. I actually considered adding it in an update and it would probably work one way or another. At least on Windows, from what I've read. But it could come with a few downsides. Saving the audio files might be unreliable, sharing patterns would be more complicated and the interface would probably be harder to read.

Don't have much free time at the moment, but it's still something I wanna look into!

Omg this is super great! def worth signing up to itch.io for it :D

this game is so much fun, and i can create something in the process too ! thank you for sharing it with us : )

On itch.io there are soo many fun stuff,But this one was the best for me,Thanks for making this awesome game (or app)!

Ah, that's quite a compliment! Thank you! :)

I realize now that I didn't pay attention, there is no bug, I just was going fast because I was trying to make something and save it for later during class. Sorry for the undo stress, it works perfectly. :) Also thank you for my best stress reliever

Ah, no problem. Glad this got resolved. But still useful to know what mechanics might be confusing, I'm gonna make it more intuitive in the next update. Thank you! :)

This game is a relaxing experience with enough complexity to keep you engaged and curious, good work :) 10/10

Thanks for the nice review! :)

Really love this, sort of thing I can just chill in whilst improving my music skills.

One thing though is that the save button doesn't seem to work instantly. Seems you have to hold it down or something right? Be nice if that was indicated along with a pop-up for successful saves so I don't accidentally lose my work.

An alpha version had the save button working with just a click, but after getting some feedback, I thought keeping it pressed might be a better way to avoid accidentally overwriting patterns. So you need to keep it pressed until it stops blinking now. It is explained in the tutorial, but I can see that it might be counter-intuitive with how the rest of the buttons work. I'll see if I find a better solution for future versions! Probably also using the display to the the left to indicate that saving worked (or failed).

I'm glad you love it and thanks for the feedback! :)

I quickly grabbed this because I loved the art style; 20 mins later I ended up with a nice little beat.  Honestly, I was quite surpised how such a simple ui could put together so many beats.

Happy to hear you had fun with it. Thanks for the nice feedback! :)

This looks so great! Would love a Mac build, if you could get one together!

Thank you! A Mac build should be possible, but there could be a problem with Apple blocking third-party apps with Gatekeeper by default, as I can't sign those apps with an official certificate (requiring a membership for 99$ a year).

But I'll see if I can create a test build!

This is amazing. I was wondering, if someone makes music in this are they allowed to use it in their own games?

Thanks, I'm glad you like it! And yes, you're allowed to use it in your own games...or pretty much any other medium, for that matter! A credit like "using [LOFI CHIP-HOP MACHINE] by fricochet" is appreciated, but not required.

And if you use it for something, I'd be interested to hear what you made with it! :)

Oh my gosh, thank you so much. I've wanted to be able to make music for my games and this is the first program that has really clicked for me.

It might take a while but I will link you something once I finish. :)

One of my main goals was to make it accessible for people who don't use other music programs (much), so I'm really happy to hear that! :)

And looking forward to it! Your other projects already look pretty cool. Rainbow Jam Simulator is short but sweet, and I'm definitely gonna play "Do I Pass?" soon.

I'm glad that you really focused on accessibility. I have wanted to learn but googling brings up so many different options and expensive things. It's wonderful to just have something simple to use. After the tutorial I made a few songs that I was really happy with.

Rainbow Jam Simulator was really rushed but I am pretty proud of "Do I Pass?".

You and your friends have been doing really amazing interesting work that I didn't know existed which was really cool to find. I plan on going through your backlog too.

Ah, I had the same difficulties when I got into sequencers and drum machines a while ago. Makes me happy that the tutorial seems to have done its job. x)

Thanks once more! I'll probably see you again in the comment section for "Do I Pass?". :)

No linux build? Can it be done?

The project looks amazing, i wish i could play with it.

Thank you! I'm not using Linux, but I got a VM running Ubuntu 18.04.03 yesterday and that seems to be enough to create a build. The core mechanics work fine so far, but there are some issues. I'm not sure if they're related to the build or just the VM, but it needs some more testing before I release a build publicly. I'll update the page and comment here to let you know when it's done!

I tried running the program on linux with Wine (Ubuntu 19.04) and it runs fine except for the audio, which sounds really weird and nothing compared to your video. I still did the tutorial and as someone with no music theory at all, it really help me understand how to start making beats, so keep it up and thank you for your work.

Thank you for your kind words! The linux test build that I run in a VM sounds mostly like the Windows version does, there's only a noticeable audio delay (probably the VM) and the frame rate is a bit low, so that the drum rhythm is a bit off. I plan to install Ubuntu on a USB stick soon to test how it performs on my real computer.

There are two build options for Linux, one of them should have a better performance and would be preferable, but doesn't seem to work right now. Looking in support boards showed that other devs have the same issue at the moment. Maybe a bug in the game engine, maybe a recent update for a required Ubuntu package that made it incompatible, not sure. Anyway, I'll see what I can do!

I managed to do a build with the other, more optimized build option now. It worked perfectly in my VM and Ubuntu 18.04.03, but on my USB stick version, it still had issues, although I'm not sure if I just configured Ubuntu wrong or if the game code is to blame. Unfortunately, I don't know many other Ubuntu users I could ask, so...could you help testing it? You can find the build here, the password is "chiphop".

There are two versions. In theory, the YYC one should be better optimized, but may require additional packages. The VM one probably has worse performance, but may be more compatible. Although on my VM, there was no real difference.

(Well, in this case, the VM version also has an additional feature and an "L" button on the right, which wasn't added to the YYC build yet, but that would be added for a future public release as well. Should hopefully not influence whether they run smoothly.) 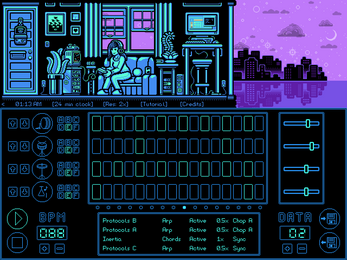